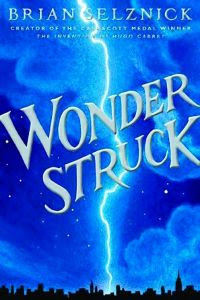 Today's review is of
"Wonderstruck" By: Brian Selznick

Synopsis from Barnes and Noble:


Ben and Rose secretly wish their lives were different. Ben longs for the father he has never known. Rose dreams of a mysterious actress whose life she chronicles in a scrapbook. When Ben discovers a puzzling clue in his mother's room and Rose reads an enticing headline in the newspaper, both children set out alone on desperate quests to find what they are missing.

Set fifty years apart, these two independent stories--Ben's told in words, Rose's in pictures--weave back and forth with mesmerizing symmetry. How they unfold and ultimately intertwine will surprise you, challenge you, and leave you breathless with wonder. Rich, complex, affecting, and beautiful--with over 460 pages of original artwork--Wonderstruck is a stunning achievement from a uniquely gifted artist and visionary.

My thoughts:
If you have kids, are a librarian, or just enjoy Young Adult fiction, "Wonderstruck" is for you! This is a gorgeous story told by words and through pictures. The story of Ben is told through the words, and Rose's story is told entirely through pictures.
Ben is an only child whose Mother has recently passed away. Through a lightning strike, Ben loses his hearing and becomes completely deaf. While living with his relatives, Ben decides to set off on his own and find the father he had never knew. He finds clues to his father's whereabouts and sets off to find him in NYC.

The story told entirely through pictures, is that of Rose, a girl from the past. You watch her as she leaves home and goes on her own quest to find her mother in NYC. Rose's story eventually evolves to the now and intersects with Ben in a truly magical way.
This story is wonderful. I will be completely surprised if this doesn't win some pretty fantastic awards. Beautifully written, beautifully illustrated, and a great story for young and old. I know I am definitely steering my tweens and teens toward this one. 4 Stars out of 5!
P.S. All of the pictures in this blog post are taken from "Wonderstruck" and by: Brian Selznick. I wanted to share the gorgeous artwork!