I'm Officially off of Evanovich! Are you? 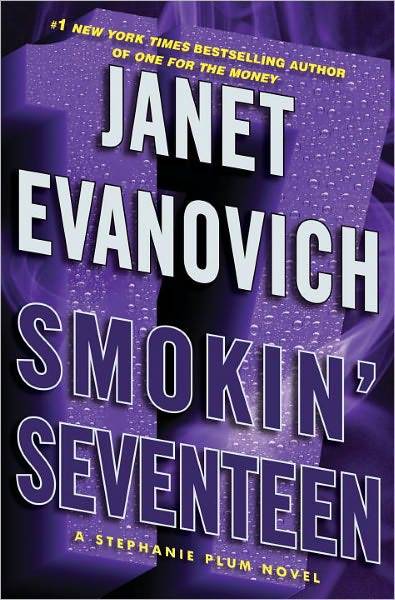 Where there’s smoke there’s fire, and no one knows this better than New Jersey bounty hunter Stephanie Plum.Dead bodies are showing up in shallow graves on the empty construction lot of Vincent Plum Bail Bonds. No one is sure who the killer is, or why the victims have been offed, but what is clear is that Stephanie’s name is on the killer’s list.Short on time to find evidence proving the killer’s identity, Stephanie faces further complications when her family and friends decide that it’s time for her to choose between her longtime off-again-on-again boyfriend, Trenton cop Joe Morelli, and the bad boy in her life, security expert Ranger. Stephanie’s mom is encouraging Stephanie to dump them both and choose a former high school football star who’s just returned to town. Stephanie’s sidekick, Lula, is encouraging Stephanie to have a red-hot boudoir “bake-off.” And Grandma Bella, Morelli’s old-world grandmother, is encouraging Stephanie to move to a new state when she puts “the eye” on Stephanie.
With a cold-blooded killer after her, a handful of hot men, and a capture list that includes a dancing bear and a senior citizen vampire, Stephanie’s life looks like it’s about to go up in smoke.

What the Brunette Thought:
This is the end of an era. I have been reading Janet Evanovich books for at least the last ten years, if not longer…and I am declaring today no more! No more will I deal with the indecisive Stephanie Plum who can’t choose. No more will I deal with Ranger whose entire dialogue is “Babe.” No more will I deal with Morelli, who allows his girlfriend to pretty much do anything she wants…with anyone and its ok as long as she comes to him once in a while. No more I say!
I went to “One for the Money” in theaters this weekend, so I was in a Janet Evanovich mood. The last book I had read was 16 so I was in the mood for some Stephanie Plum. Sure the books weren’t as great as they were in the beginning, but really who is? I needed some Morelli in my life with a little Ranger on the side and I decided to go for it.
I am sad to say I made it about 1/3 of the way through and had to put the book up. I cannot tell you how disappointed I am with this chapter in the story. First off, Stephanie is kind of a ho-bag. First she’s sleeping with Morelli AND THEN the very (and I mean the very) next night, she’s in bed with Ranger. What? Ever heard of an STD? Ugh. Gross. Then back with Morelli again. The two men act like its ok, it’s just Stephanie. NO!
The thing that probably bothered me more than Miss Hoochie was the utter improbability of the actions in the story. Sure Grandma’s crazy but at least there was a little believability, now its just a farce. Lula is almost the same – how many times do we need to hear she’s carrying a bucket of chicken and still hungry. We get it. It’s not funny anymore. The actual moment I put the book down was at a hot dog stand, Lula actually squirts mustard in a man’s tush. Honestly. That actually happens. I won't even go into the Vampire thinkin' old man, nor the dancing bear they got as collateral on a bond loan.
So I boldly declare today will be my last day to read Janet Evanovich. Will I miss her? Sure, absolutely. But, I would hate to sully my fun memories of the Plum family with these weird, stilted new events that I despise. I was with you for 16 books, but now I’m lost forever.


What do you think?
Do you think Evanovich has lost her touch?