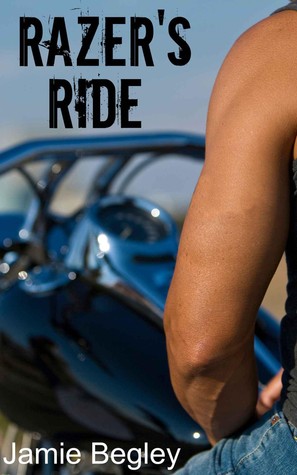 
Beth Cornett is the town good girl, so staying out of the way of the motorcycle club’s dangerous members was a no brainer. Unfortunately, she manages to catch the eye of Razer, who has every intention of tempting her to take him on despite her misgivings. When her worst fears are realized, she is left heartbroken, determined to forget her walk on the wild side.

Razer was not going to change for any woman, not even Beth. Their lifestyles were too different; betrayed she ran. Realizing his mistake too late; she was not about to forgive and forget. It takes a killer intent on targeting Beth to bring her back to him and The Last Riders for protection. Razer may have learned his lesson, but this time, as long as she is at the club, she has to play by their rules.

My Thoughts
Going through a list of new motorcycle romance books, I came across the Last Riders Series by Jamie Begley. Always open to a new series and I love to come across a new author, so I decided to pick up the first few in the series.

Beth is the stereotypical good girl in a backwater town. Her father was a preacher who preached hell fire and damnation to the town. Growing up in that environment, Beth was sheltered from the harsher aspects of life and frankly had never let her hair loose for a single moment. Protecting her sister comes naturally to her and though conflict and pain were never strangers for Beth, she’s determined to have more to her life.
Razer has never claimed to be an angel. Attracted to the good girl next door, it seems as if Razer can’t wait to see how bad she can be. Even when Beth tries to initiate a relationship with the local pastor, she is drawn back in by Razer who she almost becomes addicted to. With her background, her emotionally unstable sister, and a man who can’t commit to only her, Beth has to decide exactly how much she can handle.
So a few disclosures before I talk about what I thought - I read this book out of order. I bought the first three but accidentally read Viper’s Run first. With that said, I liked Razer and Beth enough in the second book to come back and read the first book. However, Razer’s Ride is probably my least favorite book of the three.
Beth and Razer never seem to go together. Beth is the virginal daughter of a preacher, always taught to be almost exactly the opposite of everything Razer is. Razer is as bad as bad can be, he’s a motorcycle madman. He’s free with his body, with alcohol, and has a fairly laissez-faire attitude. So in all honestly, I found it awfully hard that each character could change as much as they did. Pretty far leap to be quite honest.
Razer’s Ride is the first book in the Last Riders Series and tells the story of badboy Razer and the sweet preacher’s daughter, Beth. Overall the romance was enjoyable but it had some pretty major problems. Grammar and word usage weren't always correct, which is the fastest way to take me out of the story. The story was a bit far reaching in aspects, but kept me coming back to read the subsequent stories. Fair overall but having finished the rest of the series, it is worth coming back for more.