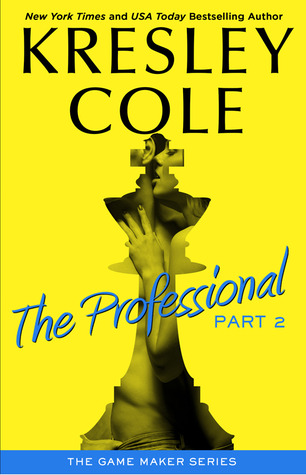 The Professional: Part 2
By: Kresley Cole


He makes the rules...Mafiya enforcer Aleksandr "The Siberian" Sevastyan’s loyalty to his boss is unwavering, until he meets the boss’s long-lost daughter, a curvy, tantalizing redhead who haunts his mind and heats his blood like no other. Ordered to protect her, Sevastyan will do anything to possess her as well—on his own wicked terms.

Rules are made to be broken...PhD student Natalie Porter had barely recovered from her first sight of the breathtakingly gorgeous Sevastyan before the professional hit man whisks her away to Russia, thrusting her into a world of extreme wealth and wanton pleasures. With every day she spends under his protection, she falls deeper under his masterful spell.

Are you ready to play?Yet all is not as it seems. To remove Natalie from an enemy’s reach, Sevastyan spirits her into hiding. From an opulent palace in Russia to the decadent playgrounds of the mega-wealthy in Paris, the two lovers will discover that even their darkest—and most forbidden—fantasies can come true…

My Thoughts
When we left The Professional: Part 1, Natalie had just met her biological father after being whisked away to Russia. Highly affluent and a possible mob boss, Natalie’s father has many enemies. When he asked his chief enforcer, Sebastian, to find Natalie and bring her to him, neither Sebastian nor Natalie could ever truly understand how intense of an attraction would soon develop.
In The Professional: Part 2, Sebastian isn’t going to back down. He knows he wants Natalie and has her Father’s permission to marry her. Natalie is attracted to Sebastian, but isn’t nearly ready for the level of commitment he seems to expect from her. Suddenly, when their world is torn apart and a bounty placed on her head, Sebastian and Natalie are forced into seclusion to hide from her Father’s enemies.
Honestly, the biggest complaint I can come up with is that I didn’t get to finish the book. Cole keeps the tension constantly rising while staying true to both the characters and the story. Super sexy, Part Two ratchets up the sensuality to epic proportions. Fun sexy times abound but the character development grabs you from the beginning. Natalie is a 24 year old innocent thrust into this Russian mob world and Cole accurately portrays her indecision and indecisiveness with this new role she is expected to play. Sebastian, having lived in this world most of his life, finds Natalie mystifying and never reacting the way he seems to think she should.
I think Kresley Cole is trying to kill me! The Professional: Part 2 was even more intense than the first. With the perfect combination of sensuality and action, Part 2 leaves you eagerly anticipating Part 3. No one can say that Cole isn’t at the top of her game with The Professional. Lets see if I can make it to January 20th now!