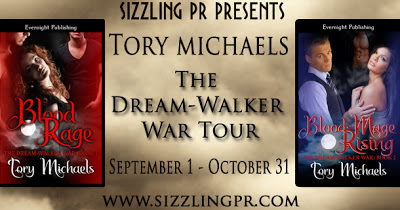 Welcome to a tour stop for Tory Michaels
The Dream-Walker War Tour! 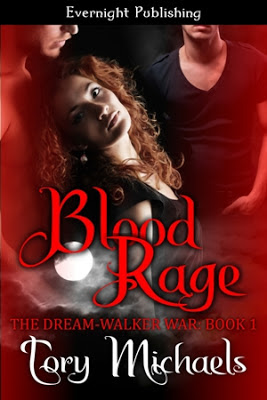 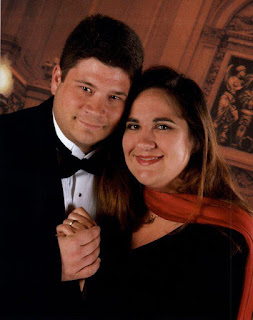 Originally from the Sacramento Valley, Tory packed up and moved all the way to Southwest Florida in 2004 with her husband (a Florida native) under the premise that ‘hurricanes almost never hit that part of the state.’ That year, 4 blasted the area. 4 more came the following year, and her husband blames her for bringing the hurricanes. She now resides in Jacksonville and is relieved that, thus far, no more hurricanes have followed her around.

She began writing in kindergarten when a turnip wished to be human and, other than a hiatus shortly after getting married, has never stopped. Her love of vampires began somewhere in junior high, and combining the two loves didn’t take long. She loves music, considers herself a ‘book slut’ whose reading habits would break her family financially if given free reign, and is (usually) delighted to be a mommy of twin Shrimpettes and a Shrimp.

My Thoughts
Before I read this book, I decided to check out reviews for this book. I think something that stuck out to me was how most of the reviews mentioned how fresh this book was...and now that I've had a chance to read this great new paranormal author, I completely agree!
Dara is a vampire living in a world where vamps, humans, shapeshifters and what have you live together. Sometimes in harmony but more often than not there is a little strife. When Dara had been a human, she fell in love with Anthony. I'm sure its no surprise that there was a bit of heartbreak and now she absolutely hates him. It wouldn't be a great paranormal romance if they didn't come back together  now would it? The true magic is in the journey these two characters take and how they deal with one another.
The storyline is so original and Tory really does a great job of approaching vampires in a new way.  Fast paced and fun, I just loved Dara and how she dealt with Anthony. She wasn't taking any attitude from him and she definitely gave it back in spades. Oh and Anthony...who I think can pretty much be summed up in one word - YUM! A fun new series from Tory and I am definitely looking forward to the sequel Blood Mage Rising.


Checkout Dara's Character Interview for a chance to win great prizes!
Posted by The Brunette Librarian at 1:00 AM