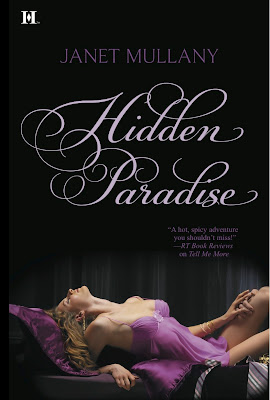 Louisa Connelly, a recently widowed Jane Austen scholar, needs some relief from her stifling world. When a friend calls to offer her a temporary escape from her Montana ranch, she is whisked into a dizzying world of sumptuous food, flowing wine...and endless temptation.

It's Mac Salazar, a journalist immersing himself fully, deeply, lustily in the naughty pleasures of upstairs-downstairs dalliances, who piques Louisa's curiosity-and libido-most. He's a dilettante straight out of a novel: uninhibited, unapologetic and nearly insatiable. But Lou's not romantic about this much, at least: Paradise Hall is a gorgeous fantasy, nothing more. A lover like Mac is pure fiction. And the real world beckons.... 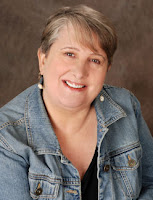 Janet Mullany, granddaughter of an Edwardian housemaid, was born in England but now lives near Washington, DC. Her debut book was Dedication, the only Signet Regency to have two bondage scenes (and which was reissued with even more sex in April 2012 from Loose-Id). Her next book, The Rules of Gentility (HarperCollins 2007) was acquired by Little Black Dress (UK) for whom she wrote three more Regency chicklits, A Most Lamentable Comedy, Improper Relations, and Mr. Bishop and the Actress. Her career as a writer who does terrible things to Jane Austen began in 2010 with the publication of Jane and the Damned (HarperCollins), and Jane Austen: Blood Persuasion (2011) about Jane as a vampire, and a modern retelling of Emma, Little to Hex Her, in the anthology Bespelling Jane Austen headlined by Mary Balogh. She also writes contemporary erotic fiction for Harlequin, Tell Me More (2011) and Hidden Paradise (September, 2012).


My Thoughts
"Hidden Paradise" is definitely a different kind of romance that doesn't necessarily fall into a certain category. It was so nice to see something different covering different premises in the romance world...and who doesn't love Jane Austen? A wonderful romance for any fan of Jane Austen or looking for something different, "Hidden Paradise" simply doesn't fit into many molds.
Louisa is a Jane Austen scholar whose husband has recently died. Somewhat lost in her world, she is given a chance to go to a weekend with authentic Austen time period experiences. Mac, a journalist, peeks Louisa's interest but has a hard time measuring up to Louisa's husband in her mind. Filled with interesting and very different characters, Louisa and Mac's romance blossoms in a different world but filled with contemporary problems.

Mac handed her a glass. “Should we be discreet and pretend our first meeting didn’t happen?”

“It’s certainly not the sort of meet cute Austen wrote about.” He might talk of discretion but his eyes shone with mischief and energy. An attractive man, she thought, and not only because she’d seen him half naked and lustily enjoying sex.

He grinned. “Chris and Peter told me a lot about you.”

“Yes, we’re good friends. Where are you from?”

“Chicago by way of London. I got this commission to do an advance piece on the house, so here I am. What are you doing in…Montana, I think Peter said?”

“Oh, long story.” She sipped her champagne. “My husband and I lived on a ranch and we taught at a school a couple of hours away. He died suddenly last year.”

She could say it now, the short version, stark and matter-of-fact.

“I’m sorry. Do you think you’ll stay there?”

“I don’t know.” Her glass was empty. “Don’t you want to ask me about historical authenticity at Paradise?”

“I guess so. After you’ve settled in, we should set up a time for an interview. It’s an interesting concept, time travel with no chance of getting stuck in the past, or treading on a bug and changing the course of history.”

“It’s a very sexy period.” She was halfway down another glass now and the room was beginning to take on a subtle, mellow glow that was half sunset, half alcohol.

“Mainly because of popular culture, of course. People say there’s no sex in Austen. They’re wrong. Her books are full of sex, but it’s all subsex. Subtext.”

“That’s the champagne talking.” He took her glass from her hand. 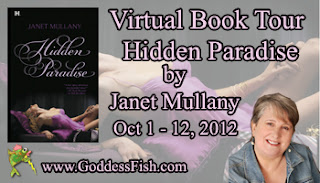