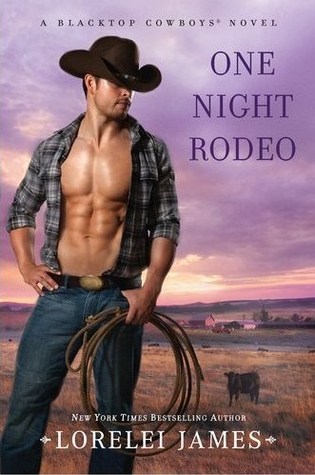 "One Night Rodeo"
By: Lorelei James


All it takes is one night to change a cowboy’s life… Barrel racer Celia Lawson knows better than to tangle with bull rider Kyle Gilchrist. The sexy cowboy’s love ‘em and leave ‘em ways have earned him a reputation on the rodeo circuit, and he’s always seen her as his best friend’s kid sister. But after one wild, tequila-fueled night, Celia wakes up to find out she’s gotten herself hitched—to a man she never should have married! When Celia insists on an annulment, Kyle has no good reason to say no—except he isn’t ready to let go of his new bride. But then Kyle inherits a sprawling Wyoming ranch, and seizes the opportunity to enlist Celia’s help. She agrees to lend a hand—with two conditions: He has to get up to speed as a rancher within six months; then they’ll get a divorce. And their marriage will be in name only. Kyle gives in to Celia’s demand, yet he's ready to prove to her he has what it takes to turn their one night rodeo into a lifetime of love….

My Thoughts:
Since the beginning of the Black Top Cowboys series, I have had a soft spot for Celia. Kyle not so much, but Celia I’ve really felt for. Her parents died when she was young and being raised by two bone headed brothers isn’t the easiest life. The past three books we’ve watched Celia come into her own and I was so glad to finally see her happily ever after.
Celia and Kyle have known one another since they were children. They had played together, rode bikes together, went to school and now both were on the rodeo circuit. While they each were semi-attracted to one another, they never once acted on it since Celia’s brothers would have had a heart attack. Yet as our book starts out, one morning both Celia and Kyle wake up, married to one another.


“You signed the papers. With little hearts by our names, if memory serves. So some part of you wanted to marry me, Celia.”

Sure the book is a little formulaic, but I liked it. Kyle and Celia go back home and live in Kyle’s newly deceased father’s house, coincidentally fairly close to Celia’s family. The novel deals with changing perspectives of families and the changing Wyoming ranching life.
What the story may lack in originality completely makes up for with Kyle and Celia. They are both spunky and strong willed, which leads to all sorts of delicious conflict. Whenever these two are in a room together, I almost wanted to cheer because they had the most delicious verbal sparring I've read in a long time. Love a smart dialogue and this one definitely has it.
“One Night Rodeo” is a great romance for fans of the series or fans of western romance in general. Its a bit naughty with plenty of hilarious situations as Kyle learns to be a rancher. These two people are both thrown out a limb not knowing what will happen, so they each must make concessions and allowances in order to truly be happy with one another.

Check out the rest of the Black Top Cowboys Series
“Corralled”
“Saddled and Spurred”
“Wrangled and Tangled”
“One Night Rodeo”
Posted by The Brunette Librarian at 7:00 AM